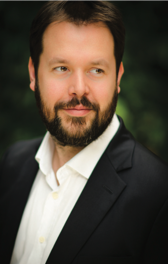 Louise Alder was born in London and studied first at the University of Edinburgh and later at the International Opera School at the Royal College of Music.

She represented England in the 2017 BBC Cardiff Singer of the World competition where she won the Dame Joan Sutherland Audience Prize.

Born inThe Netherlands, French horn player Stef van Herten is a member of the Oper Frankfurt orchestra. He also appears with orchestras around the world as a soloist.

Pianist Sholto Kynoch makes his first of two appearances at NNMF. He is internationally known as a pianist working with the world’s leading singers and also as the Founder and Director of Oxford Lieder which is held every autumn.

TICKETS £23
This concert is generously supported by Richard and Briony Linsell, and Susan Thaw