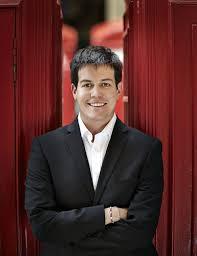 Benjamin Appl was born in Regensburg where he was a chorister at the city’s distinguished Regensburger Domspatten choir. He studied in Munich and later moved to London, where he still lives, to continue his studies at the Guildhall School of Music and Drama.

He has a very busy and varied career and is equally in demand on the concert platform and as a recitalist. Refusing to be pigeonholed, Benjamin’s versatility enables him to be just as at home in English song as in the great German song cycles. During the first part of 2020 he will give an extensive tour of Germany, will perform in Scotland with the BBC Scottish Symphony Orchestra, give a recital in San Francisco and appear at Wigmore Hall in a concert performance of Blow’s Venus and Adonis. He will also perform Winterreise in Salzburg and sings Beethoven’s song cycle An die ferne Geliebte in a new arrangement of the work for baritone and string quartet by Simon Rowland-Jones at the final concert of the 2020 North Norfolk Music Festival.